Imagine a resort that is surrounded by the most natural landscape, a place where you can experience luxury at its best. The mastermind behind the glorious masterpiece is the award-winning architect, Mr. Willy Sandy Ekaputra, who took special care in preserving nature during the resort’s development.

Obtain the first NFT resort naming right through your own hands! LABS Group is thrilled to announce their world’s first community-owned resort and first Timeshare (RTS) NFT, which will be sold via an auction on the Refinable marketplace in mid July. Learn more about the resort and the auction below.

Traditional timeshares give you the right to use a vacation property for only a short period each year (three or seven days). Appointments are difficult to make, and peak season spaces will most certainly never be available. Furthermore, they aren’t an investment as they decrease in value over time. In most cases, timeshare owners are lucky to get 10 cents on the dollar when they try to sell the shares, and some timeshare owners even resort to paying people to take their timeshares off their hands.

Holders are also liable to any operation loss, including resorts damaged by natural disasters. Older properties that are also renovating may charge “special assessments” that can be hundreds or thousands of dollars more. With the increasing list of disadvantages regarding the traditional timeshares market, LABS Group hopes to solve such problems through the innovation of RTS-NFT. 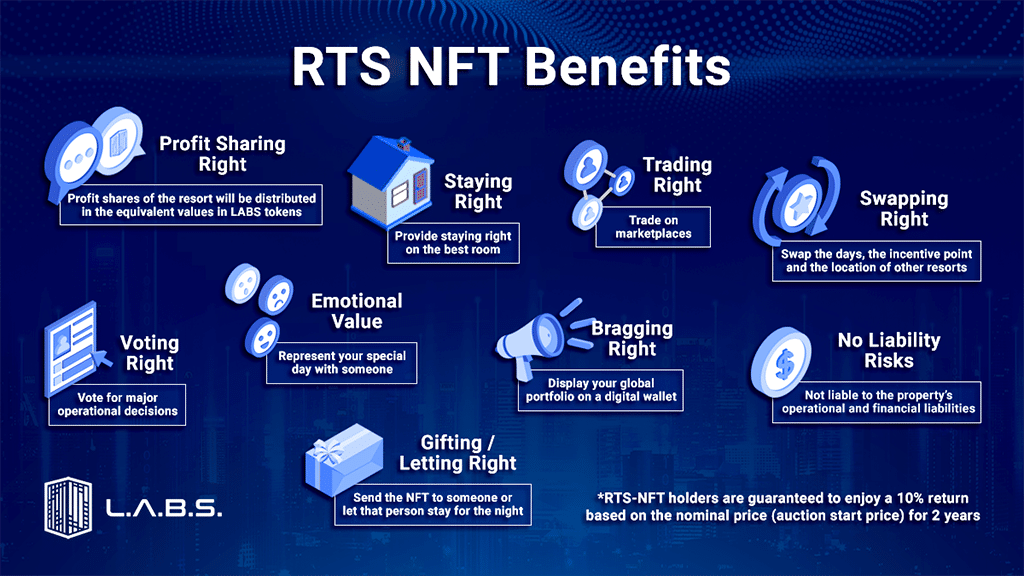 The LABS RTS-NFT revolutionizes timeshares by fixing the most critical pain points mentioned above. To achieve this goal, RTS-NFT holders will unlock a number of benefits. The benefits are as follows:

Holders of the RTS-NFT also possess the right to send the NFT to others, or they may choose to build up their digital wallet portfolio, they are also guaranteed to enjoy a minimum of 10% return. Such advantages truly demonstrate the strengths of RTS-NFT, which LABS Group believe will revolutionize the blockchain industry.

To pull off their first RTS-NFT auction, LABS Group will be collaborating with several of their partners to pool resources and attract as many eyes to the auction as possible.

The partners who are assisting them in this auction are as follows: 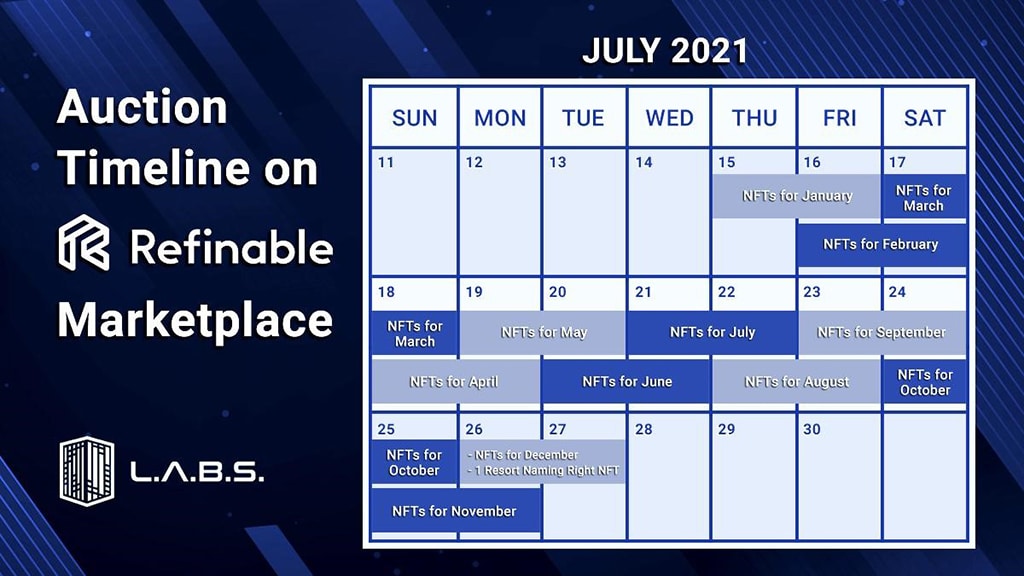 The auction will be held on Refinable’s NFT marketplace on the 15th of July 2021 and will last for 13 days, with each auction lasting 48 hours. In total, 365 RTS-NFTs will be available to the community, one for each day of the year. 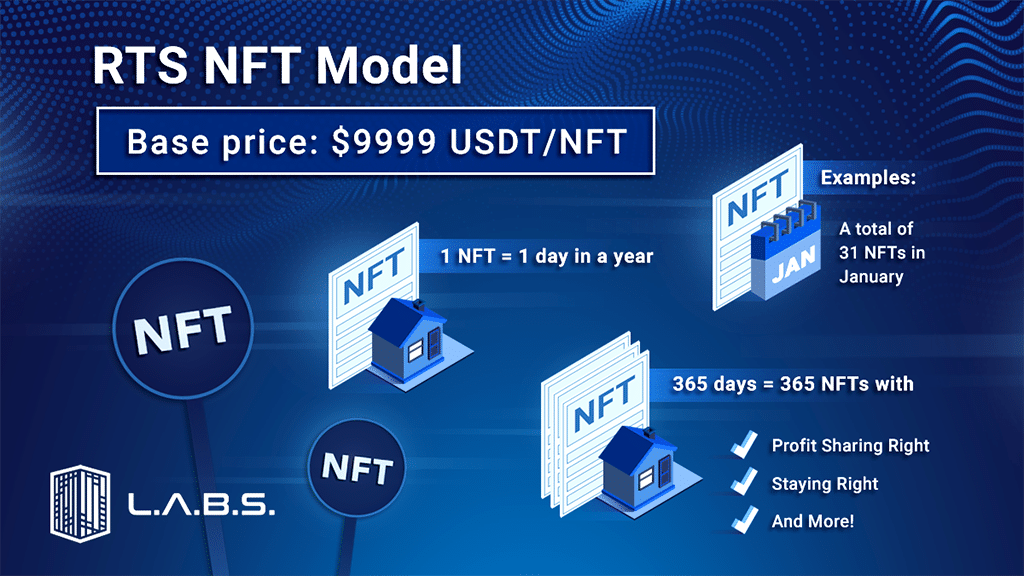 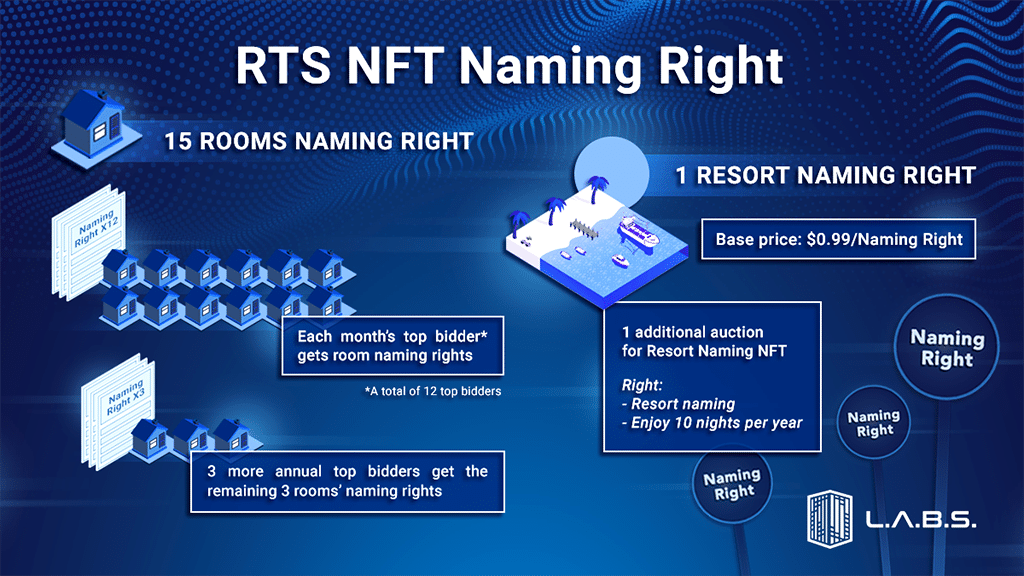 For this auction, a one-time benefit (naming rights) will be given to fifteen top bidders. The top twelve bidders from each month will receive room naming rights for twelve rooms. In addition to that, three other top bidders will receive the rights to name the remaining three rooms in the Kunang Kunang Resort.

There will also be one NFT that gives the holder the right to name the resort, and on top of that – a staying benefit of 10 days per year. 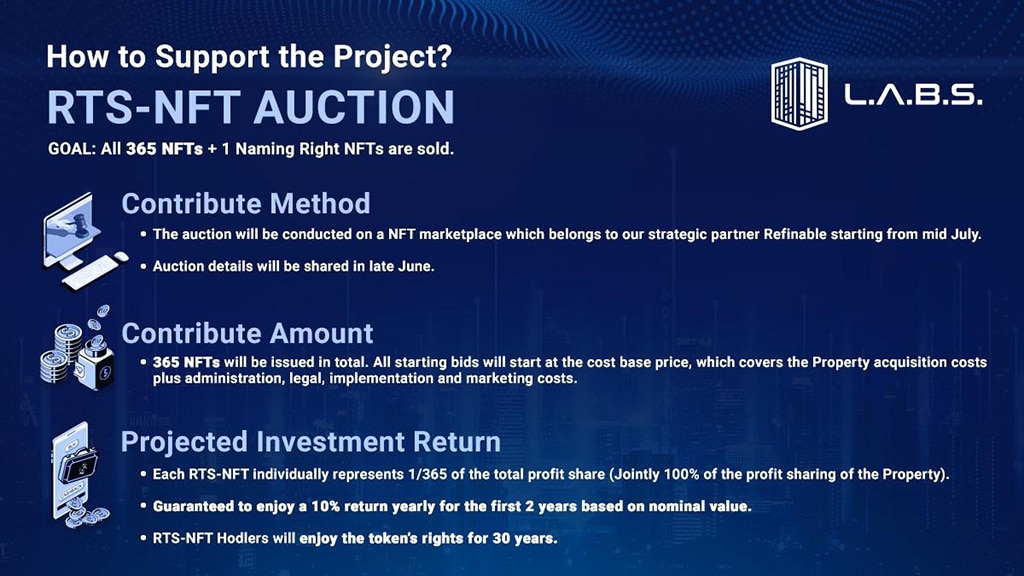 To join the auction, you may proceed by going to their contribution site and reviewing all of the project details. Next, locate “LABS Group” at the Refinable’s marketplace. From there, you may start to place your bids in mid July! The team will then verify the bidding details and notify you as soon as possible. 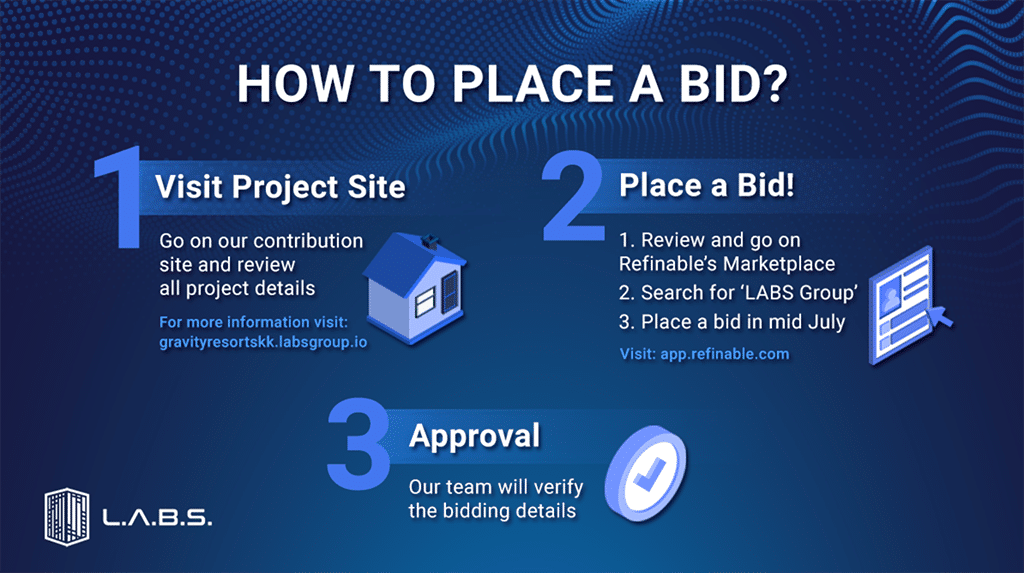 The Kunang Kunang Glamping Resort is located in the mountainous part of Licin, Banyuwangi in Indonesia. It is only a 30 minutes drive away from Banyuwangi Airport and a 30 minutes flight from Bali.

Immerse yourself with mother nature as you stay at the resort. There are big-sized Glamping rooms (36m² and 44m² per room) with front-facing rooms towards the mountains where you can stay for 170USD per night. Kunang Kunang also prioritizes their guests’ privacy with 15 Private glamps that are 5 to 10 meters apart.

The resort is well located to allow easy travel to the closest attractions like the majestic Jagir Waterfall 200 metres upstream from the resort, and the stunning blue-flame Ijen Crater Blue Volcano that is only an hour drive away.

The future of Kunang Kunang Resort is bright. In recent years, the average daily rate of Banyuwangi’s hotels have increased by over 20%. In 2020 specifically, the average occupancy rate of all hotels in Banyuwangi is 65%. Considering the effect the recent pandemic has had on the real estate industry all over the world, Banyuwangi still performed exceptionally well, with occupancy numbers hitting 80-90% for most hotels. This is an encouraging sign for future Gravity Resort developments in the near future. 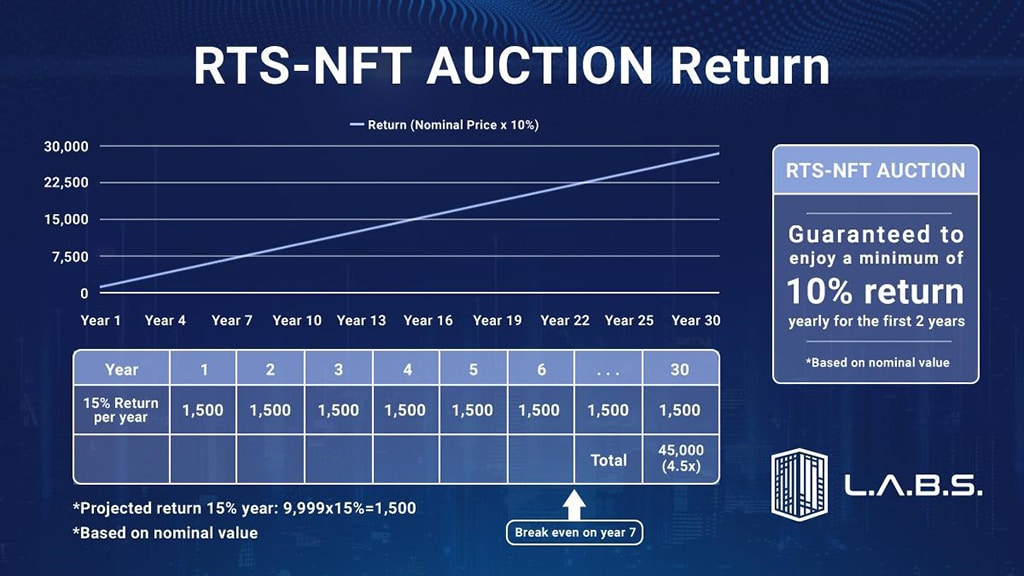 Tourism will increase steadily over the next few years, leading to a significant increase in the cost of land in Banyuwangi. A long-term holder of the token will enjoy token rights for 30 years, receiving 10% per year on nominal value for the first two years. The return rate in the image above demonstrates the never ending possibilities Kunang Kunang Resort possesses. With the bright future of tourism in Banyuwangi, LABS Group sees the potential of Kunang Kunang resort and is confident in its position in the real estate market hereafter.

Make sure you stay up to date and follow LABS Group on all social media platforms so you don’t miss your chance to join the auction and support their mission to revolutionize the hotel investment and timeshare industries. As pioneers of combining NFTs and real estate, there will be many new innovations continuing to pop up as they develop this new concept, taking tokenized real estate to the forefront of the real estate industry.

All 365 auction winners will automatically enter the grand lucky draw powered by LABS and Gravity Resort in the future. Stay tuned for more updates on this exciting event.

LABS is a blockchain-based real estate investment platform looking to simplify investor access and capabilities within the asset class. Using the LABS platform, anyone can easily tokenize and fractionalize their real estate, allowing them to sell or trade it in order to gain instant liquidity. LABS Group also offers a regulated securities market for tokenized real estate trading, a crowdfunding platform, and a lending application that allows for peer-to-peer lending based on the collateralization of tokenized real estate assets. LABS Group is redefining the real estate industry, making it more accessible to everyone.