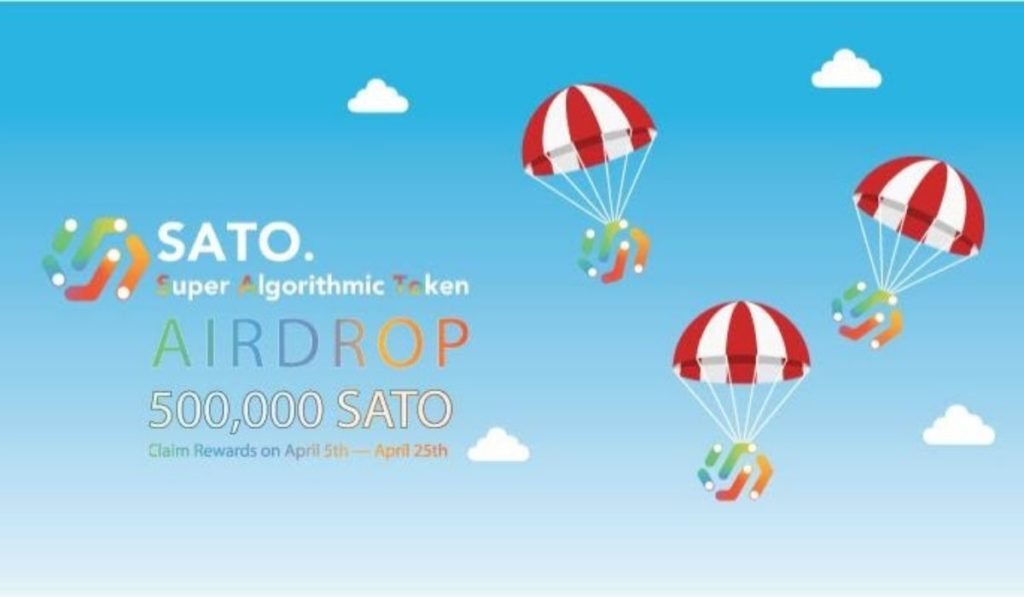 The Super Algorithmic Token (SATO), a next-generation stablecoin, is set to airdrop 500,000 coins to selected Defi users from April 5 to April 25. According to the press release on the matter, the 500,000 SATO coins will represent 10% of the entire token supply.

The team behind SATO stablecoin will distribute the tokens to crypto enthusiasts based on retroactive actions on selected decentralized financial platforms. The four selected DefI platforms that will see their communities rewarded include BADGER, DIGG, AMPL holders, and Gitcoin donors.

Notably, a snapshot of the four selected projects was taken on March 25, whereby 50,000 unique addresses qualified for the airdrop. Each address is eligible for 10 SATO tokens, whereby the users are expected to claim them in 21-days after the launch.

The team behind the SATO token has created other means for crypto enthusiasts to earn passively. “Additionally, the SATO project offers additional earnings, through participation in the initial coin staking which started on March 16, 2021, on SwapAll and will be available on multiple platforms soon on Ethereum, Binance Smart Chain, and Huobi Eco Chain,” the company noted in the press release.

Through the airdrop to different crypto community members, the team behind SATO stablecoin intends to make the project well known to enhance global adoption. Furthermore, they are offering the next generation type of stablecoins that operate on layer 2. As a result, transactions are carried out faster and at a minimal fee.

Notably, SATO tokens are not pegged to any global currency or asset but operate on a mechanism of demand and supply. The project prides itself on the fastest algorithmic stablecoin that supports rebase of multiple smart chains.

In a bid to ensure transparency and credibility to its users, the SATO project has been audited by Beosin Blockchain Security. Besides, the project has been built on layer 2 technology with a simple to use application.

The SATO project seeks to solve the existing challenge with most stablecoins, particularly on transaction fees. The team is venturing into a market that has grown exponentially over the past few months. The stablecoin market has a capitalization of approximately $68.6 billion with its volume almost triple that according to metrics provided by CoinGecko.

The SATO project is aimed to steer forward the decentralized financial ecosystem at a time there is a notable increase in global crypto adoption.